The collapse of Carillion has left building sites at a standstill (including one or two hospitals), with workers laid off and sub-contractors left unpaid

The collapse of the UK construction firm Carillion has left the UK policy of PFI (public finance initiatives) in tatters, while exposing everything that has been wrong with the government’s long standing policy on financing infrastructure projects.

Since the Thatcher era, the government (both under new labour and the Tories) have used PFI to fund public infrastructure projects. The logic is that rather than the state putting up its own cash, instead they rely on the private sector to fund projects, with the state paying it off in instalments. This avoids the need for the government to issue bonds and increase the public debt.

Now as anyone who has ever taken out a loan will know this is a very silly way of financing a project. The state will nearly always be able to borrow money more cheaply than a private firm. And it is always desirable to reduce the length of time over which you pay back any loan. Case in point, I’ve recently been looking into overpaying my mortgage and doing so will save me tens of thousands over the lifetime of the mortgage (so much so I wish I’d started doing it earlier!).

Indeed financing projects via PFI’s is 40% more expensive than doing it via public finance. And furthermore, those debts are still technically the responsibility of the taxpayer to honour. The estimation is that the UK’s liabilities on PFI contracts amounts to £200 billion. To put that in prospective, that would meet the funding costs of the NHS for a 1.5 years. Its about four times more than the net cost of leaving the EU. So its not really reducing the public debt, much like tuition fee’s its just hiding it at great expense and passing on the costs to the next generation. In essence, its another example of inter-generational theft.

Future generations will by paying off the folly of these PFI contracts for decades.

The other problem with PFI’s has been that the construction companies have been behaving quite recklessly. They’ve often drastically under priced jobs in the hope of undercutting the competition, gambling that they’d be able to outsource the job, squeeze subcontractors or using the small print of the contract to deliver the building in a substandard condition. The end result has been building projects that have consistently been delivered late, cost a lot more than planned and generally have not been up to the standards expected (having high maintenance costs for example).

And privately run public services have been more of the same. For example the firm running the Newcastle metro was actually budgeting for the cost of fines as it was cheaper to just pay the fines than run the service properly. In essence many of these companies have been playing the same game as the banks prior to the financial crisis, making reckless bets thinking the gravity train would run forever and anyway we’re too big to fail the government will have to bail us out if the balloon goes up.

Carillion had its fingers in lots of pies

The reasons for Carillion’s collapse are multiple. There are reports of them taking massive losses on contracts in the middle east. Also the brexit effect has to be considered. The sudden jump in inflation has pushed up the cost of everything, making the cost of delivering on a project much more expensive. That said, a well run company should have priced the job with enough of a contingency to allow for that. I know some in construction who are feeling the brexit pinch alright, but they’re at least still covering their costs. There worry is more the long term implications it brings (what happens when the economy slows down and the order book runs dry and they can’t hire experienced Polish brick layers anymore to complete the contracts they’ve still got).

However it seems Carillion were throwing caution to the wind and inevitably they just pushed to hard and got caught out by circumstances. And with building sites at a halt, subcontractors not being paid, it has left an awful tangled mess for the government to sort out, as well as dealing with the public anger over fat cat bosses awarding themselves massive bonuses as their firm failed. And the government doesn’t really have a choice but to act, as there’s a risk that the collapse of this firm bringing down other firms too, the impact on the wider economy to consider and the simple reason that they can leave public services unfulfilled or expensive building projects incomplete.

Again, this highlights the short comings of the PFI process, if not the fallacy of the entire neo-liberal economic model. Even if private firms could deliver services for less than the costs of the public sector (and they can’t), what do you do when a company supplying a public service fails? Inevitably the government has to step in. So all PFI’s (or privatising public services) amounts to doing is privatising profits for the few while socialising the risk for the many.

Carrillion’s collapse is essentially a re-run of the events leading up to the banking crisis (on a smaller scale). When you ignore the lessons of history, you are doomed to repeat them.

Future historians are not going to be kind to us, frankly they are going to have a field day. Naturally things like Trump, brexit and climate change denial will figure highly. And the left’s response? Oprah for president?Seriously?Your answer to Trump is an anti-atheist, anti-vaccine, woo pedaller? Or in the UK they propose, Corbyn, a man who can’t control his own party, hasn’t changed his opinion on anything since 1963 (nor his wardrobe) and is so old there’s a 1 in 10 chance he might not wake up every time he nods off for a nap.

But its often surprisingly little things that make it into the history books. For example, the gladiators of Rome. I suspect that any Roman would be appalled to know that this is how we remember his civilisation. He’d probably point out that bread and circuses, well the bread bit was…

2017 might have been a bit of rotten year all round, but it was good year for renewable energy. The UK recorded a record low in terms of carbon intensity, with an average value of 233 gCO2/kWh (against a historical level of about 450 gCO2/kWh). And several key Rubicon’s were crossed this year. In April, for the first time since the industrial revolution, the country went a day without coal. In May solar outperformed coal. And the price of offshore wind fell below that of nuclear power.

And as regular readers of this blog will note, this is not because of any new pro-renewable policy…

At the core of the republicans tax plan is the notion that if they cut taxes for the wealthy, there will be a trickle down effect and we’ll all be better off. But when you ask for any hard evidence of this, they’ll usually go quiet for a bit, mumble something about Reagan (who, as I discussed in a prior post put up taxes, oversaw three recessions as well as the biggest decline in real wages in history), then change the subject.

Well actually, as Richard Reich points out, we’ve actually been conducting a tax experiment in the US going back over many years now. He compares the state of economies like California (which has relatively high state taxes) to economies like Texas and Kansas (who have very low taxes). And suffice to say, the results of this “experiment” are at odds with everything that conservatives say about tax.

We’re told that high taxes will lead to sluggish economy growth and lower wages. California has consistently had one of the highest economic growth rates, highest wages and highest standards of living, not just in the US but in the entire world. Kansas and Texas are left eating California’s dust. 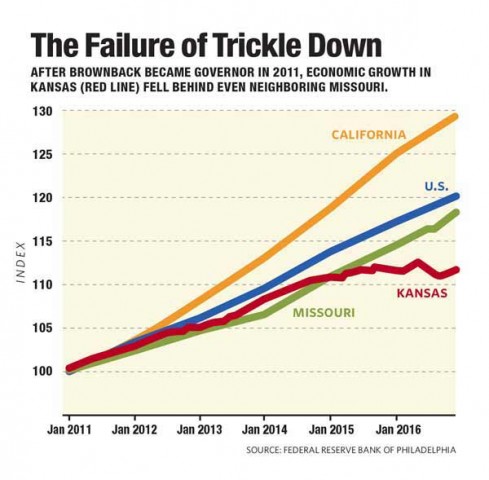 High taxes we are told will scare away the wealthy leading to capital flight and more unemployment. Well then explain Beverley hills! Or why are so many tech billionaires and their companies concentrated in California? Think about that for a minute. The CEO’s of Apple or Google could simply move headquarters to Kansas, staying within the same country and save themselves millions a year in personal taxes. Yet they haven’t. 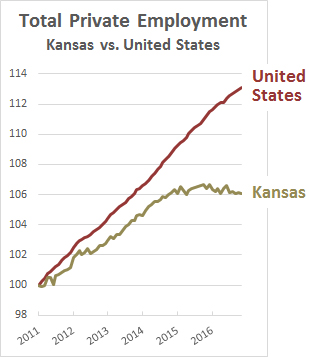 Private employment in Kansas, far from growing in response to tax cuts, it has dropped well below the US average

And here in Europe we’ve been conducting our own tax experiment. The Scandinavian countries have traditionally adopted a policy of high taxes and large levels of public spending. Yet they too enjoy some of the highest standards of living in the world, the highest wages and yet low levels of public debt. By contrast it is southern European countries, such as Italy, Greece the UK or Ireland, who’ve gone for the low tax model who tend to be the ones getting into trouble.

Of course we are being a bit obtuse here. The economic growth rate of one country or state is not solely down to its tax policy. There are many good reasons why the tech companies are based out of California and not Kansas (the weather for one thing! And I can’t see a bunch of computer nerds surviving a night in a bar full of rednecks). The economy of California is fairly diverse, covering, mining, oil, manufacturing, tourism, agriculture, movies, etc. Texas and Kansas are by contrast heavily dependant on one or two core areas, notably agriculture and oil production. A low oil price or a hard winter and their economies can tank. So tax is merely one of a number of factors that influence the economy. But that’s kind of the point. 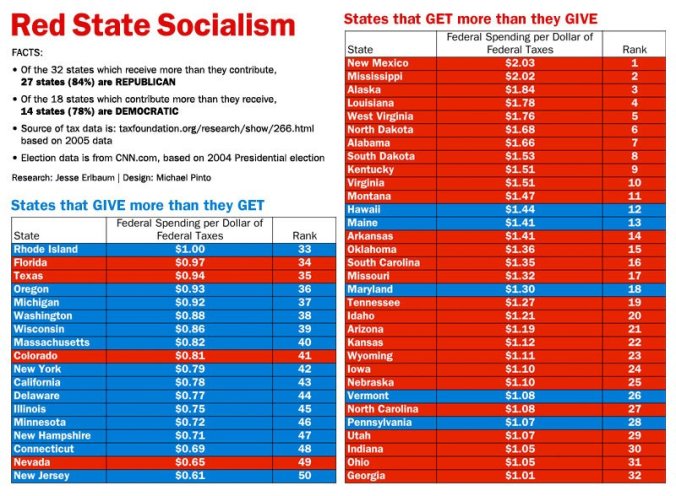 Republicans will have us believe that if you put up the taxes of the wealthy, an increase that will cost them a few pence on the dollar, something they can easily afford (and probably won’t even notice, as its their accountant who works out their taxes). That they’ll be so incensed by this, they’ll take their money, pile it in a corner and sit there sulking. While if you give them a tax cut, that again amounts to few pence on the dollar more into their pocket, they’ll go on a massive spending spree. Not only spending the pennies they got back from the tax man, but millions more of their own money. And they will magically find a way to spend it in a way which will only benefit the local economy. i.e. they won’t say buy an Italian sports car (which is made abroad) or invest it in a transnational corporation (which does most of its business overseas and reports its profits within some offshore tax haven) or hoard it in their bank account.

So the point here is the best we can say about tax cuts is that they might give a temporary economic boost, but the benefits won’t necessarily occur where we want them (or need them) to occur and the effect is likely to be short lived. While increasing taxes (up to a point of course) doesn’t necessarily cause a negative effect on economic growth. But a government can chose how and where it spends the money it raises from taxes.