Well you do have to hand it to the republicans. If you are going to tell a lie or con someone, better to go for the big con. And so we have their tax plan, that will give billionaires a massive tax cut, yet put up the taxes on middle income Americans (after a brief interlude of 4 years). At the same time it will blow a massive hole in the US government budget, causing the deficit to skyrocket.

Exactly how much higher the US deficit will rise to is unclear, some say $1 trillion another report estimates $1.7 trillion (against a current deficit of $440 billion, so a doubling or quadrupling of the deficit). Suffice to say this makes a mockery of the GOP mantra throughout the Obama era. We were told, from the very first days of the tea party that their objection to Obama was because he was spending way too much money and threatening the health of America’s finances. Several times they threatened to shut down the federal government because they refused to raise the US debt ceiling. Now blink and they’re saying well bolix to that, my new Gulfstream ain’t going to buy itself.

Of course, this is hardly a huge surprise. For Republicans the deficit has long been a political football. They’ll use it against the democrats when they are in power, then spend like a sailor on shore leave afterwards. The five most recent Republican presidents have all run deficits, generally worse than their democratic predecessor, with Reagan being the worst offender (although Trump/Pence will almost certainly now exceed him) and Bill Clinton being the only recent US president to return a significant budget surplus.

Obama did indeed run up some large deficits, which means he stands out from other recent democratic presidents (who ran much smaller deficits, or ran a surplus). But he was dealing with one of the worst recession in ninety years, a crisis which was the fault of the Republicans and their mismanagement of the banks. He certainly didn’t bring this deficit down nearly as quickly as he should have, that is true. But in his defence he did try to cut spending and proposed some tax increases, but the Republicans fought every step of the way.

Now the GOP will no doubt claim, oh but this will stimulate the economy and create loads of jobs, which will then increase tax revenue. Well firstly there is very little evidence to prove that these supply side economics actually works, indeed if anything the evidence suggests the opposite is true. The economy is like an orchestra. Lots of different factors come together to make it work. You need inward investment, a reliable energy source, a stable political system, an educated workforce, access to foreign markets, etc. Although one must note Trump’s proposed protectionist measures will likely impact on a number of these and could well restrict economic growth.

And when we say the economy is like an orchestra its perhaps better to look on it as more like a school band. It succeeds in battering out a tune, not because of the idiot in the back out of sync with the rest of the band, but despite him. But the GOP, like the parents of this spoilt little brat, filter out all of that and assume the band’s success is all down to their little darling’s ill timed and out of tune musical torture.

But even if we give the GOP the benefit of the doubt, the level of growth that would be necessary to reduce the deficit is pretty significant. Do the maths and you’ll see that US economy would have to grow by a rate of 30-50% over 5 years (6-10% per year!) to cancel out this deficit. That would require a level of economic growth equivalent to China or Ireland in the 2000’s, which is simply not going to happen. Especially when you factor in the impact of the baby boomer retirements, which will pull tens of millions of taxpayers out of the work force and then claiming their retirement benefits.

What about cutting spending? While the GOP don’t mention it in these tax plans, its almost certain when these colossal deficits become evident massive spending cuts will have to follow. Indeed, this might be the whole point of the tax cut, because it will give them the excuse to basically sell of the US federal government (to themselves!). Well the flaw in this plan is, like I said earlier, Obama tried that, but the only things with enough zeros behind them that could be cut and make a difference to the deficit are things like defence spending or retirement funding. And those are the very sacred cows the GOP won’t cut. Obamacare, for the record, was set up to be revenue neutral (it costs money but by making workers healthier and more productive it should cancel out its own impact on the deficit).

Cutting out whole government departments (as the GOP proposes) on the one hand, won’t cut the budget enough and secondly will leave key economic sectors effectively an unregulated wild west. The financial crisis, the collapse of ENRON and various other scandals of the G. W. Bush era showed the dangers of such deregulation (and again most of Obama’s deficit was run up repairing the damage from these crises). So budget cuts of this kind would cause more harm than help. Its the equivalent of setting your house on fire in the middle of a blizzard in order to keep warm. 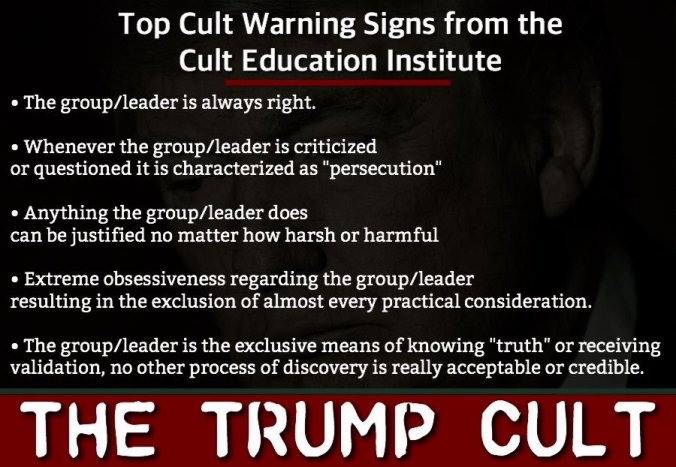 But anyone looking to debate Republicans on this issue is wasting their time. We need to recognise the fact that American conservatives aren’t a political movement any more (they’d need these things called “policies” first!) they are basically a cult. A cult of angry people who’ve concluded that solving the problems that make them angry sounds like a lot of hard work, so instead they’ve placed the comforting lies of their demagogue leaders above facts and decided to go urinate in a ballot box. This is not strictly speaking a right wing phenomenon (Corbyn’s supporters in the UK, Sinn Fein in Ireland, etc.) but it has certainly taken over the political right to a much greater extend. 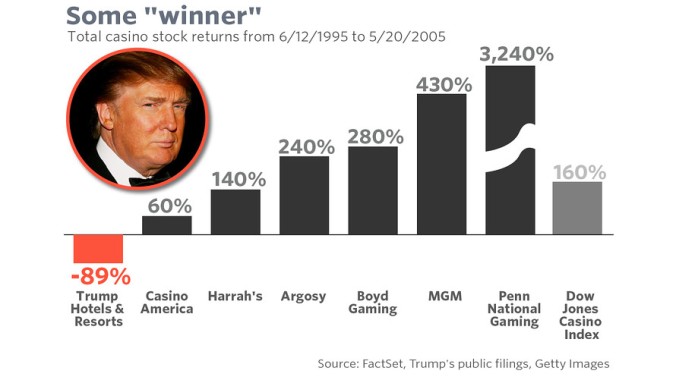 Trump the brilliant business man managed to lose money in the one industry where the house always wins!

Indeed, so much so that it wouldn’t be accurate to call American conservatives Christians anymore either. Many even go so far as to suggest they’d believe the word of Trump over the words of Jesus. This is a cult that is openly anti-intellectual and hostile to facts of any kind.

Consider the fact that Trump now claims things he was caught on tape saying never occurred. There’s phenomenon with US shootings, going right back to Columbine High, where every time a shooting occurs, conspiracy theories flood the internet, often leading to the victims of said shootings and their families being harassed and threatened by pro-gun activists.

Now the problem with these fantasy cults is that they are entirely self destructive and self defeating. As the woes of the brexiters demonstrate the aren’t going to get to have their cake and eat it. They will almost certainly leave the UK worse off than it was prior to brexit. And longer term, the likely outcome will be either the UK rejoins the EU (on not nearly as generous terms as it now enjoys) or the UK probably breaks up. For anyone who voted for brexit as some sort of protest against the Tories, well firstly you’re an idiot and secondly for the next two decades the priority for the government (whether its labour or the Tories in power) will be brexit and dealing with the fallout afterwards. Meanwhile your local public services will wither and die, your local hospital will close….or be sold off to some American multinational. You essentially voted to be ignored even more than you were being ignored before.

And the second problem, as Trump demonstrates, is that while these demagogues can’t fulfil their outlandish promises, they can use their time in office to feather their own nests and do a few favours for those who helped them into power, as these tax cuts and a number of Trump’s political appointments demonstrates.

As with the brexiters, any angry Trump voters who voted for him so that those pricks in Washington will pay attention to the forgotten America. Well you’re a moron. And now you’ll be ignored and forgotten even more. And the likely outcome of your decision is national bankruptcy. Which given how massively dependant many mid-west (and generally Republican voting states) are on federal spending will spell disaster, as many in these states are reduced to penury.

The only socialism in America, aside from tax cuts for billonaires, is liberal voting states propping the economies of republican voting states

In short, voting for “populists”, or the cult of fantasy as we should really call them, is the equivalent of the chickens voting to put the fox in charge of the hen house, just because he promised to built a wall around the hen house and make the wolves pay for it. This begs the question, what happens with this process runs its course and the lies of the cult of fantasy are exposed and the followers realise they’ve been had.

Well firstly don’t expect that to happen any time soon. I mean look what’s happened to many cults throughout history. Many literally go down in flames with their cult leader (blaming his enemies for forcing him into killing them all), long after it should be obvious they’ve been conned. It will take sometime for the penny to drop.

I guarantee you, a decade from now the line the Daily Mail will take is that the UK was forced out of the EU against its will. And its economic woes since then are all the fault of the EU and the handful of migrants that are still allowed into the country (who will presumably be forced to go around wearing little yellow stars). Whoever is the poor unfortunate sap of a democrat who has to clean up the massive deficit mess left behind by Trump and co. will be blamed by fox news for the very mess Trump is now creating. Why they will say with nostalgia can’t we go back to those glorious times when Trump was in charge. And why can’t we name some national landmarks after him (because you’ve already named everything after Reagan!).

Its possible that we could see the collapse of the mainstream parties and the rise of some sort of third way, as was seen in France recently. But the electoral system in both the US and UK are more or less designed to make it impossible for any alternatives to the two party system to emerge. So my guess is that the end result of the cult of fantasy is that governments will become ever more extreme, with lurching to the extremes of the right and then the left, getting more authoritarian with every iteration. Meanwhile nothing gets done, nothing changes and the problems build up until its possible the whole system of western style democracy might well collapse. Unfortunately I suspect Putin’s Russia is a template for what we can expect future governments to look like.

5 thoughts on “Shameless hypocrisy and the cult of fantasy”