One has to worry about the consequences of a US/UK trade deal. As I’ve said before, getting a trade deal isn’t the problem, its the concession the UK will inevitably be forced to accept as part of that deal. 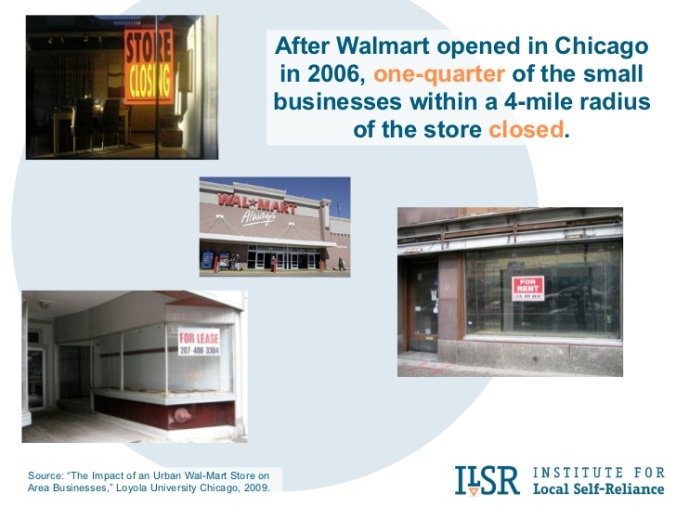 This week Liam Fox tried to argue that on the one hand they’d ban chlorinated chicken from the UK and in the same sentence so what if we do allow it. Well if you adopt the first position, banning US food products and cars (many of the larger SUV’s will fail current UK/EU environmental standards) the Americans will respond in kind and what exactly will we be trading with the US? On the other hand, if you allow Chlorinated chicken or steroids in beef, you’ll be cutting yourself off from the EU market.

A case in point of everything that is wrong with the US is Walmart. For those unfamiliar with Walmart they are a large supermarket chain known for engaging in fairly unethical practices. Quite often they’ll move into a town and quickly put all of the local business out of business very quickly, turning a once thriving high street into a ghetto. Walmart often offer a full comprehensive range of services. You can get groceries, firearms, fast food and have your car’s wheel’s balanced while you wait. So when I say all of the business in the high street goes, I mean all of it.

As the company is run and operated by a family of staunch neo-conservatives, they have been known to use their companies de-facto monopoly on sales to censor content of  books, CD’s or videos solid in their store. So while they’ll allow you to buy Die Hard with vengeance (despite is sex and violence), they’ll rate anything from Michael Moore as “non family friendly” and ban it from their shelves.

And they achieve their monopoly by vastly undercutting the competition, something they can do by squeezing their suppliers mercilessly. They squeeze their staff salaries so far that many are dependant on welfare. Of course this means indirectly Walmart are in receipt of subsidy from the state and they are often able to pressure counties and towns into offering them tax breaks or free highway construction in return for them setting up in an area (big government get off my back…accept when its propping up my monopoly). And they have a harsh anti-union policy. Any time a union has been successfully established in a Walmart, they’ve shut the store down.

But the problems with Walmart get worse when they decide to leave. After having milked a community dry, destroyed the town centre and devastated the local business community, they are known to just up and leave, often simply because of a slight drop in sales, usually because the local economy is struggling through some temporary problem.

Of course this means the largest employer in said town disappears overnight, making a bad situation much worse, while leaving locals with a long drive to the next town over to get basic groceries. In short it can lead a once vibrant town to basically die, all some very rich people with more money than they know what to do with, can get that little bit richer.

Now granted, the UK has its fare share of problems with aggressive supermarkets and town’s desperate for cash willing to bend over backwards to help them, even when they should really tell them to piss off. For example in Oxford they have a wonderful covered market, which the council (desperate for cash due to the austerity) has raised the rent on local traders by 50% …..twice….leading many to fear for its survival. Meanwhile they’ve been offering tax breaks to the likes of Starbucks to set up in town and paying for road infrastructure to the benefit of Tesco’s.

The difference in the UK is that there are laws limiting the size of supermarkets, protecting small business from monopolistic pressure and employees from union busting companies. Now, I would argue the trouble is that these laws don’t go far enough and are sometimes broken by the supermarkets (who know they can get away with a lack of enforcement). But post-brexit there is a very real risk that all of these protections will disappear as part of any trade deal. So we could well see ASDA (owned by Walmart) pursuing a Walmart like reign of destruction across many of the UK’s small market towns. So if you voted for brexit, congrats, because this, like so many things, this is what you voted for.

One thought on “The trouble with trade: Walmart”