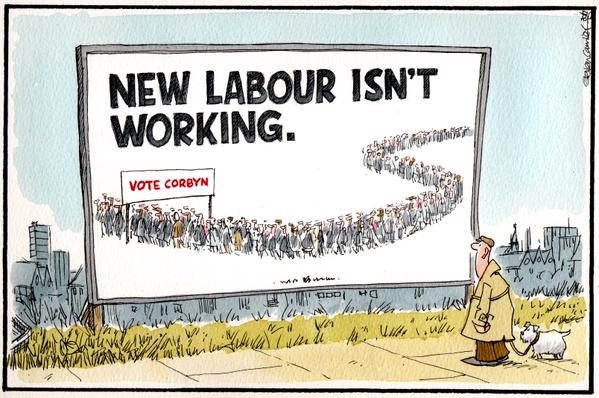 The other night on Question time the Tory MP Elizabeth Truss (of expenses scandal fame) was rattling off all the Daily Mail-esque myths about labour under Corbyn. E.g. that labour plans to abolish the army, build a monument to the IRA, sell the country to China, etc. Indeed I thought I might put in a coupon on my blog for Tories to cut out and forward on to their favourite right wing news paper.

Based on something Corybn or his cabinet member _______________ (delete as needed) said / mumbled /sneezed /comments attributed to him by tabloid hack / in 19__ it is now Labour policy to (delete as necessary) kill santa claus / Nationalise all breweries / Steal all our children and make them work in the mines / Replace the Queen with John Prescott / Bring in 200 million Syrians and 1 billion Romanians / Turn Faslane into a Soviet Missile Base / or _______________________.

This will mean (delete) The end of the UK / The triumph of Beelzebub / The Dead raising from the grave / The Communists, Indians, Chinese, Romanian Gypsies, Roswell Alien, Scottish taking over / The apocalypse / The Rapture / The end of Corrie

There was much made of Corbyn not singing the British national anthem. Was this a sign of Republicanism? Was he anti-British?….Or maybe its because the British national anthem is a bit crap, and more than a little racist towards Scots. Okay, our Irish one ain’t much better (it has several sectarian references) and there has been discussion about changing it (this is why Ireland’s Call is used at Rugby matches). But at least we are having that conversation, which is long over due in Britain (what’s wrong with Land of Home and Glory…or the Vindaloo song?).

Then again, at least the UK anthem isn’t as bad as the French one. I mean, have you ever heard the lyrics to it? Its downright nasty (blood gore, cut throats, eat frogs legs, etc.) and the French get kids to sing it! I got kids singing a song like that in English, I’d be reported to child services pretty darn quickly.

But anyway, certainly it has to be said that the chances of labour winning is reduced with Corbyn in charge. However, before the Tories get cocky or carried away, they need to consider that this raises the stakes, should they screw up in the next five years. Keep in mind that when there is a change of government 10% of the time, its because the people are convinced enough by the opposition to change horses. But the other 90% its because the party in power screwed up royal and the public voted for the other party to get these dittoheads out of office.

The Tories have committed to many policies recently that have the potential to be very destabilising, and that could easily cause so much damage to the country as to cost them the next election. The EU vote for example carries huge risks, regardless of which way the vote goes. Their policies on energy has seen the UK fall rapidly from one of the top ten places to invest in Green energy to the bottom ten, just as we head into a potentially cold winter with only a hairs whisker of spare capacity (how many Tory voters will suddenly think Corbyn has a point if their policy of privatised energy leads to power cuts and soaring prices?). And their policy on universities could lead to uni’s failing, something I’ve pointed out before will likely entail a very heavy political price (anyone who doubts that, go ask the lib dems!).

And of course all it takes is some scandal involving Cameron or Osborne getting up to something naughty and that could easily throw the next election. After all, if we were to make claim’s about Tory policy based on what Cameron said back in his Bullingdon days it would now be Tory policy to refer to the public as “plebs”, the abolition of all state funded education (cos the riff raff don’t need it), privatisation of the NHS, that the wealthy should have the right to park in disabled bays…..oh wait some of those are true!

Hence, rather than full steam ahead and lurch to the right, I’d argue the Tories are better aiming for a more middle ground strategy, else they will simply embolden labour and close ranks around its new leader.

One thought on “National anthems and Tory doomongering”